Once upon a time, I was an Autism Support Worker. 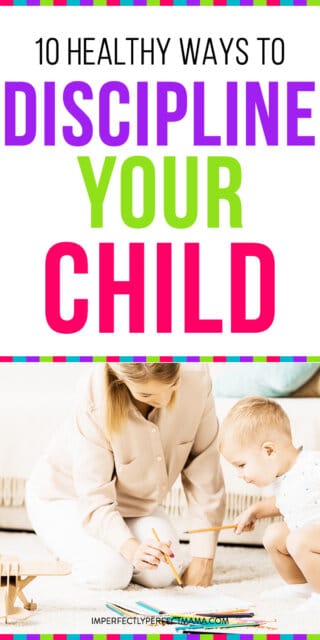 I worked one-on-one with Autistic preschoolers, not only teaching them academic skills but also dealing directly with undesirable behaviors.

At work, we called it “behavior intervention” – at home I call it discipline, but the principles are pretty much the same. The goal is to squash unwanted behaviors while teaching your child the value of appropriate behaviors.

This differs from punishment, which uses fear, shame and guilt to control a child’s behavior. Perhaps the end results of eliminating an unwanted behavior is the same, but you don’t need to use punishment to accomplish this.

Healthy Ways to Discipline Your Child

1. Stop the Behavior Before It Starts

There are some situations where you can curb an undesirable behavior before it even occurs. As long as you know your child’s triggers, you can redirect and guide them toward an appropriate behavior.

For example, when I worked with Autistic preschoolers, we would control the child’s environment to prevent meltdowns. This way, we could focus on reinforcing the positive behaviors that we wanted to increase – in hopes that those meltdowns would eventually go away.

So if we had a child that would meltdown every time we passed the toy room, we would find a different route or ensure the door was closed. We would then perhaps work on having the child request properly to visit the toy room or use it as reinforcement for another behavior we want to increase.

If you know a certain situation is going to set your kid off, try to avoid that situation in order to gain control over it.

Another proactive measure to prevent a behavior is to give your child a choice between two options. While your kid feels that they have control of the situation, you are actually retaining that control.

It works like a charm! When I give her the choice, she has the control to choose the lesser of two evil vegetables. In the end, she eats the vegetable.

Kids thrive on consistency and foreknowledge. Sometimes you can even curb a behavior by explaining what is about to happen and what they can expect to occur after.

For this reason, it’s important to clearly define consequences to your child in relation to the undesirable behavior.

Example: If you want your little one to stop smacking their younger sibling, they need to know what will happen if they do.

It’s a great way to gauge whether or not the consequence will be effective while potentially avoiding the behavior altogether.

If you plan on sending Smacky McSmackerson to his or her room, you’d want to know if that sucks for them. Should it be an undesirable consequence, it may be enough to prevent them from hitting.

If they know what’s coming, they will be better able to pair that consequence with the behavior in their mind, making learning from it easier. Otherwise, they may be so wrapped up in figuring out why they’re going to their room instead of learning from the experience.

4. Be Consistent With Consequences

Children are super smart and total geniuses when it comes to figuring out what they can get away with.

When you are not consistent with your consequences – meaning that you let the behavior slide on more than a few occasions – your child will jump all over that and repeat the behavior ’til their little heart’s content.

In order to eliminate a behavior, you need to give the consequence every single time. This is how children learn that this particular behavior is not worth it.

And you need to make sure you’re implementing a consequence immediately. Children have short attention spans so, if you’re giving the consequence hours later, they will not relate it to the behavior. Therefore, the lesson is lost.

5. Make Sure the Consequences are Proportionate to the Behavior

The consequence has to be proportionate to the behavior. In other words, you need to be fair.

This helps your child understand the seriousness of their unwanted behavior.

You may send your child to a timeout chair for minor infractions such as throwing toys. However, you may remove all the toys from their room if they tornado through their belongings in a fit of rage.

They’ll understand that destroying their room is a behavior they definitely do not want to repeat in the future. Throwing a toy creates an inconvenience that makes the behavior eventually not worthwhile.

Some behaviors require immediate consequences, such as hitting a sibling, but if you can intervene before or during the early stages of a behavior you should give a warning.

Sometimes this can stop the behavior but, at the very least, it gives your kiddo an expectation of what will happen next.

Say your child is throwing those toys. One toy goes flying and you say: “If you throw your toys, I am going to put them away.”

Your child might stop throwing the toys to avoid the consequence – or they may continue. In that case, put take the toys away.

However, if the behavior is ongoing (such as the tornado room), then give the warning anyway – but don’t give them a choice:

“This is unacceptable. You are going in a timeout.”

Again, children need expectation so even if you are going to follow through with the consequence, give them a heads up of what is about to happen.

7. Let Natural Consequences Do Their Thing

This is real world learning and sometimes we, as parents, need to let it happen.

I did this a lot when my daughter was a toddler. If she didn’t heed my warnings about climbing or running, I would just let it happen. If she fell, she learned naturally not to do it.

Obviously, I would intervene if the situation was serious.

Otherwise, this is perhaps the best way for children to learn about appropriate and inappropriate behaviors. It’s how they’ll continue to learn as adults in the real world.

8. Acknowledge Their Emotions and Help Them Identify How They Feel

Remember that disciplining is a learning experience.

We don’t want to cause our children emotional pain in order to squash a behavior – we want them to learn why that behavior is inappropriate.

Part of that is helping children understand why they are behaving that way in the first place.

Oftentimes, children go berserk because they are feeling something (anger, frustration, etc.) that they can’t articulate or explain. Imagine being mad and not being able to say: “I’m mad.”

So when your child is displaying an unwanted behavior, take the opportunity to help them identify their emotions.

9. Discuss the Behavior When Everyone is Calm

As part of the learning experience, you’ll want to discuss the behavior with your child to ensure that they understand what they did in relation to the consequence.

However, doing so in the throes of a behavior is the worst time. No one is going to listen to each other.

Wait until the behavior and consequence is over and everyone is calm. Your discussion with your child will be much more effective.

The other day my daughter and I had a blowout and she stormed to her room. A few minutes later I went upstairs to have a discussion with her. As we were talking about it, emotions started to flair again.

In that case, I let her have some more time to cool off and tried again. The second approach was far more successful.

Remember that this moment of discussion is not a lecture. It’s a chance for you and your child to make amends and better understand each other.

Children learn through imitation and will look to you to determine how to behave in certain situations.

It’s an easy rule of thumb: If you don’t want your child to act a certain way, don’t act that way.

Avoiding hypocrisy also avoids confusion. If you discipline your child for displaying a behavior you display, they will only feel confused and not learn anything.

I used to throw things when I got mad. Eventually, my daughter started throwing things too.

I couldn’t discipline her, so I stopped my behavior. She eventually stopped, too.

It’s Okay to Pick Your Battles

Disciplining doesn’t have to be perfect. As parents, we can’t be on our discipline game 24-7.

We just don’t have the time or energy.

It’s okay to pick your battles, as long as it doesn’t become the norm in your home. Sometimes, some behaviors are not worth getting upset over.

Just be aware that the more you let a behavior slide, the harder it will be to get rid of that behavior. Sometimes, though, it’s worth it.

Do you have any discipline stories to share? Ever burst out laughing while trying to send your kid to a timeout? Share your stories in the comments! 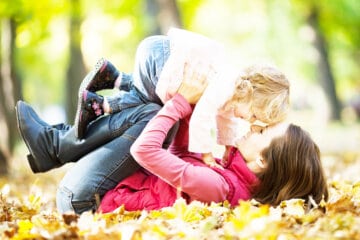 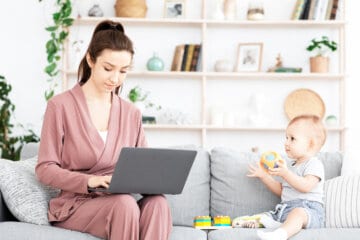