Many women long for motherhood but what happens when something we’re naturally supposed to be able to do doesn’t come naturally to you? 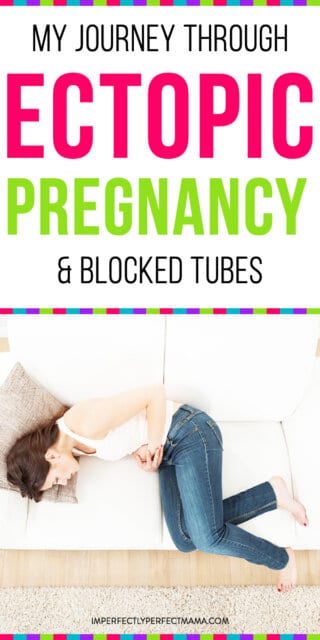 Infertility is common in many women and it’s tough being surrounded by constant reminders that being a mommy may not be in the cards for you.

When I was diagnosed with blocked Fallopian tubes, I felt like a failure. I was afraid I wouldn’t be able to give my husband a little version of the two of us together.

Fortunately, I was able to naturally unblock them and now I’m a mom to beautiful children.

This is long overdue, but I wanted to share my story to provide hope for anyone who is dealing with the same situation:

I took a test an anxiously waited for those two pink lines. When they showed up, I couldn’t believe it.

My husband, who was my boyfriend at the time, joined in my excitement. He started pacing back and forth muttering things like, “I have to get a van. My car isn’t baby friendly.”

We jumped the gun and immediately started calling our parents to share the news.

Not even a week later, I started experiencing sharp pelvic pains. I’d never been pregnant before so I didn’t know what to expect.

Like many of us, I took to Google to find out what was going on. Gas pain, round ligament pain, and implantation is what I determined was to cause to be.

It wasn’t until I doubled over in pain that I realized something wasn’t right.

What Is An Ectopic Pregnancy?

Blocked Fallopian tubes turned out to be the cause. When your tubes are blocked, often times it can result in an ectopic pregnancy.

I’d never even heard of that before. An ectopic pregnancy is when the embryo gets stuck in your Fallopian tubes and cannot make it into the uterus.

The doctor explained that the pregnancy wasn’t viable and, let me say, her bedside manner was sub par.  A week prior I believed that I was going to have a baby and she immediately crushed those dreams with no sympathy.

The pregnancy was terminated with a shot of methotrexate to dissolve it.

A year later, we were pregnant again.

Unfortunately there was no excitement this time around. Only fear in it’s place.

The familiar pain resurfaced and I knew that it was another ectopic pregnancy.

This go round, the ectopic pregnancy wasn’t caught in time and it resulted in the loss of my right Fallopian tube. I had to undergo laparoscopic surgery to remove it.

Life After an Ectopic Pregnancy

After losing not one, but two pregnancies, I was devastated but I was also on a mission. The previous pregnancies weren’t planned but the next one would be.

My husband and I sought the counsel of three different doctors who all said our only hope of conception was to do in vitro fertilization (otherwise known as IVF).

IVF is when a fertilized egg is manually placed in the uterus by a doctor, completely bypassing the Fallopian Tubes all together. The procedure can cost upwards of $20,000.

That’s for one child!

It just didn’t make sense to spend that kind of money trying to conceive when that money would have been better spent on the actual child.

So I went to work trying to find a natural way to unblock my Fallopian tubes.

The first step is to determine what the issue is.

Infertility is classified has trying to conceive for at least a year with no success.

Losing one of my tubes prompted me to see what the status of the remaining one was.

Both previous pregnancies were in the same tube so I was unsure whether or not the left tube was also blocked.

What Is An Hysterosalpingogram?

A Hysterosalpingogram, or an HSG, is a test to determine if your Fallopian tubes are blocked. Dye is pushed through the tube and if there is spillage from the other side, the tube is open.

I was able to watch the whole process on an x-ray screen. The process takes about five minutes.

It was a bit painful because the left tube was blocked. Talk about disheartening.

At least I now knew what the problem was and now I could begin my research to figure out how to solve it.

What Are Blocked Fallopian Tubes?

Blocked Fallopian tubes are when there’s scar tissue that creates a blockage. Each month when an egg is released, it travels through the Fallopian tube into the uterus.

If there is a blockage due to scarring, the egg can get stuck. So what causes the scar tissue?

Knowing what is causing the blockage will help you know how to remove it.

Once again, I took to the internet to do some more research.

There’s so much free information out there but you have to know what you’re looking for and where to look.

YouTube and blocked Fallopian tubes forums were really helpful for me.

I found it inspirational to see women who were also trying to remove their scar tissue as well as women who had already been successful.

I took lots of notes and noted the similarities in the stories of women who had been successful and tried the same products or methods.

There are also some pregnancy apps that have infertility forums. The app at the time I was trying to conceive that I participated in was the Pink Pad fertility tracker.

I’m not sure if this app is still in existence but there are others that are similar.

Facebook groups are another great option. You can get tips and support from women in these groups as well.

I’m a big believer in your body being able to do what it’s meant to do. If you improve your eating habits and your overall health, you’ll be amazed at what your body can do.

Don’t let doctors deter you from your dream of becoming a mother. They don’t have the last word.

Do your due diligence and research and see if you can naturally unblock your Fallopian tubes.

It took me three months of consistently implementing my learned strategies to clear my tubes and have two successful pregnancies.

Hello. I read your article and I have the same story as you. The links to the natural steps you implemented are not working. I would love to hear more of some of the lifestyle changes you implemented.Reply to Charna