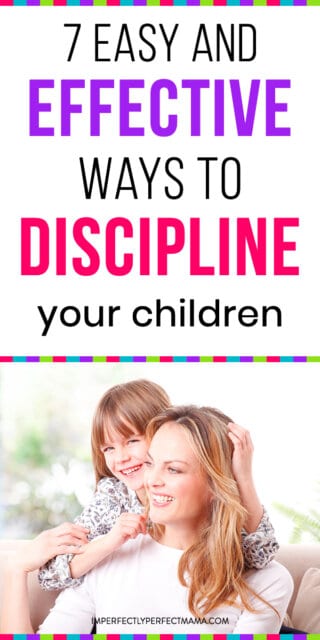 Is misbehavior a kid’s problem?

Not according to parenting coach and expert, Amy McCready.

A mother of two and a recovering yeller, Amy believes that a parent’s personality contributes to a child’s misbehavior.

Therefore, misbehavior is a parent’s problem!

It is important to recognize the parent’s role in children’s misbehavior and correct it.

Here are seven ways to discipline your children that have helped me – and I’m sure they will help you too!

From as early as three months of age, babies can be put into a routine. Having done so myself with both my kids, routines are a great way of letting children know what they should expect next.

Routines can be set for mealtimes, bedtime or bathtime.

Through routines, children will know that at a particular time of the day (or night) what they are supposed to do. Routines also allow them to mentally prepare for what is going to happen next.

If they know in advance what is going to happen next, then there will be fewer arguments, tantrums and battles with children.

It is always better to tell children in advance what you expect them to do rather than springing surprises on them.

Routines help in structuring the day for a parent as well as the child.

For a child, playing is an essential part of their life. They need to know what their ‘playtimes’ are even though they might not understand the clock or how to read the time.

Parents are the most powerful role models a child could have. A parent needs to “show and tell” their child how they expect their children to behave.

For instance, when a child is yelling, a parent might scream, ‘stop shouting’.

Do you see the irony here?

We tell children to stop screaming but we (parents) fail to do that ourselves!

Children do what the parents do and not what they say.

If the same sentence ‘stop shouting’ is delivered in a calm voice, it would have an entirely different effect!

The next time your child screams, make note of how you react!

To implement family rules, the following should be noted:

Rules would have to be followed by the whole family including mum and dad!

I believe that spending time with the child is the most important aspect of parenting.

Doing fun activities, which can be enjoyed by both, the parent and the child, help parent and child bonding.

Once children receive this attention and time with their parents, they will also be ready to ‘listen’ to what the parents have to tell them.

On numerous occasions, I have observed that once I have spent quality time with my children they are more attentive, obedient to what I have asked them to do.

Not only that but they more than willing to let me get on with my work by keeping themselves entertained either by playing with each other or doing their own thing.

5. Be a Good Listener

Being a good listener is yet another way of disciplining your children.

Does that sound strange?

Just like us adults, children also want someone to listen to what they have got to say. It could be their thoughts, feelings, likes or dislikes or it could even be a complaint about their sibling.

Whatever it is that they want to talk, parents should listen to them with their full attention.

Just like my previous tip of spending time, by listening to them, a parent would have fulfilled the child’s need for attention.

Also, if parents’ set an example of how to listen with full attention, children will do the same when the parent is talking to them.

Whether it is about routines or it is about implementing family rules, a parent has got to show consistency (to the child).

A parent has got to prove to the child that they mean what they say.

By being consistent, parents would build trust with their children.

For example, if one of the family rules is no dessert if vegetables are not eaten, then parents have got to stick to it.

Try and implement the rules as much as you can. The more you implement, the more it has got a chance of working.

In case there is an emergency and the rule has to be broken make sure you explain to your child why in this instance the rule was broken. As long as the rules are not broken repeatedly, it should be fine.

Similarly, if you have promised to take them to the movies in the school holidays, you have got to keep your word. Again, the more you keep your word, you would build more trust with your children.

So think before you make any promises to your child. Make only those promises which you can keep.

Yet another strange one!

I believe that if a mom (or a dad) is happy in their own life only then they can make their children happy. If children are brought up in a happy, positive and safe environment then they will feel more secure and satisfied in their life.

This will automatically make them more willing to listen to what a parent has got to say.

If parents are happy children will be happy too!

Try these 7 ways and let me know via the comment section which one worked out for you the most!

10 Ways to Find Peace and Create Happiness With Your…
How to Balance Your Postpartum Hormones Naturally
Infant Loss: A Heartbreakingly Honest Account of…

Priya is the writer and owner of the blog, How To Be a Positive Parent. When she is not sharing her parenting and mumpreneur tips on her blog, she is a freelance writer for hire. She is a regular mum who loves spending time with her kids and being a Mumpreneur.

We are a community of mamas who are imperfectly perfect! We share tips to help you be a loving, sharing, inspiring, hopeful, funny and wonderful mom.